It is one of the most shocking images from the Syrian war. An eight-year-old boydraws deeply on a cigarette, the small fingers of his other hand clutching an AK-47 rifle that balances awkwardly against his chest.He is too small to be able to hold his weapon properly, but this little boy, Ahmed, is already a fighter in theSyriancivil war.

The photograph, taken on the front line in Aleppo’s Salaheddin district, was used bymedia outlets around the world in a jolting reminder of the dehumanising character of war. 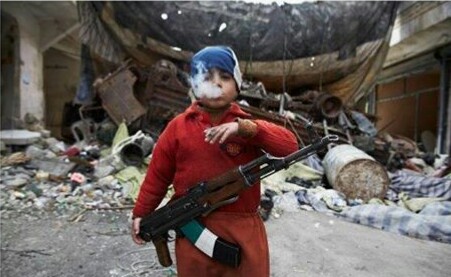 Photo: Sebastiano TomadaAhmed said he went from being a carefree boy with a loving family to a child soldier living on one of the most lethal streets of the devastated city of Aleppo.

“I ended up helping my uncle and his comrades because I have no other choice, there is no school, my family is dead, what choice do I have?” he said.Ahmed’s mother and father died in a mortar strike in Salaheddin neighbourhood, where his father had been working as a fighter with the rebel Free Syrian Army.

Now the only person Ahmed has left is his uncle, a rebel who the boy follows and imitates as he fights against government soldiers.In a red jumper and black trousers, Ahmed looks dressed in a uniform for school. For several weeks now, however, the front line has been his only playground.In the video above, the boy, clutching his gun, runs across a road littered with bullet cartridges, broken electricity cablesand strewn possession from the nearby homes that have long been abandoned by civilians.

A blanket strung across the road punctured with holes and supported by a barricade made from the metal carcass ofa burnt vehicle is the only cover from enemy government snipers that are stationed just one street away.The words Ahmed utters are incongruouswith his child’s voice:”There is always something to do here, I am never bored. The fighting has calmed down a lot from last year, we had a lot of mortars, but snipers are still a big problem.””Sooner or later the regime will kiss you with one of their bullets,” he added.

There is little left of the innocent and playful youthfulness of boys of Ahmed’s age, unnervingly replaced with the mannerisms of a grown man.In the video footage, Ahmed is seen lounging against his chair, holding his cigarette with the ease of a chain smoker.His expression is unsmiling and uncaring. His eyes stare blankly, telling the story of his lost youth.Aleppo’s front lines are lethal. Riven with snipers and erratically bombarded by artillery and air strikes, the threat of deathhangs in the air.

When The Daily Telegraph visited a rebel group in Salaheddin last month, the group had lost three men, two of them less than 18 years of age, in the space two weeks.Ahmed spends some of his time helping to man one of the front line outposts.”Weapons are heavy I still have a difficult time shooting them, I can only shoot resting on the floor,” he said.Resting his gun on a low rising wall, Ahmed watches for a sighting of a Syrian government soldier, his small fingers already resting on the trigger, ready to shoot.He mainly helps his rebel comrades with chores on the front line. He brings them tea or resupplies the other fighters with home made grenades and bullets.The hours are long and without any pattern.”There is no schedule or time here in Salaheddin,” he said.A report by Human Rights Watch has warned that hundreds of children from the towns worst affected by the conflict in Syria are being trained to take part in the war.

Young boys, mostly from the ageof 14 years old are sent on reconnaissance missions or to smuggle weapons to opposition groups.Over two years into the conflict that has claimed over 70,000 lives, hundreds of schools have been forced to close.With no education, and with many traumatised by the violence or from witnessing the death of loved ones, a generation of children is being lost to the Syrian conflict.

In one of the most disturbing moments inthe video, Ahmed’s uncle crouches behind a wall with the little boy and lights a grenade that is in the boy’s hand. Ahmed throws it over the wall and they wait for the explosion.The child said he used to enjoy riding his bicycle. Now his favourite pass time is to play at being a soldier. 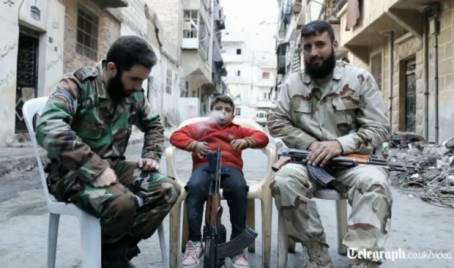