Governor Ben Ayade of Cross River State, his wife; Linda and the 2016 Miss Africa, Neurite Mendez, on Wednesday at the Millinium Park in Calabar, jointly flagged off the 2016 Carnival Calabar. 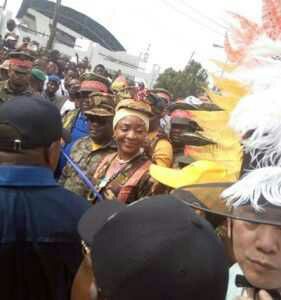 Other dignitaries sighted at the colorful event were; governor Rochas Okorocha of Imo State, former governor of Akwa Ibom State,Senator Godswill Akpabio among others.While flagging off the carnival, Ayade said the annual event now represents the true vitality and unity of Africans.
Flanked by his wife; Linda and Mendez, the governor noted that thecarnival had grown to an enviable height over the years.He expressed his administration’s readiness not only to sustain it, but introduce more innovations inorder to make it more appealing to all.” I want you to recognize the fact that the carnival represents the true vitality, harmony and unity of Africans.

It is the beginning of a newdawn in Africa”, he said.Earlier, the Chairman, Cross River carnival commission, Mr. Gabe Onah, said about  eighteen countriesincluding the republic of Korea, wereparticipating in the carnival.

The carnival proper, which also attracted some states from northernand western parts of Nigeria, was preceded by the Bikers parade on Tuesday.